TONY BOURDAIN
LIVE And On TOUR

TONYBOY
GUTS and GLORY
An Evening with ANTHONY BOURDAIN
The BOOK THAT MADE TONY FAMOUS
Posted by xpicassox at 1:00 PM No comments: 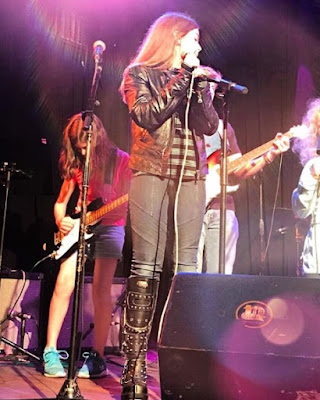 Ariane Bourdain performs with her Band at Drom in New York wearing Boots given to her by her Father Anthony Bourdain .

Anthony Bourdain‘s will has revealed new details about his finances before he was found dead of suicide on June 8 at age 61.
In court papers filed in Manhattan Surrogate’s Court and obtained by PEOPLE on Thursday, Bourdain was worth $1.21 million despite reports of a $16 million fortune.
According to the legal documents, which were first reported on by Page Six, Bourdain’s assets included $425,000 in “cash and savings,” $35,000 in a brokerage account, $250,000 in “personal property,” and $500,000 in “intangible property including royalties and residuals.”
The will, which was written in 2016, states that the majority of Bourdain’s finances will be left to his only child, 11-year-old daughter Ariane.
Although Bourdain and Busia separated in 2016, their divorce was not finalized before his death. Since their divorce was not finalized, Busia is still legally his next of kin. (Bourdain and girlfriend Asia Argento began dating after meeting during the filming of his CNN show Parts Unknown in 2016.)
Bourdain gave his “accumulated frequent flyer miles” to Busia, and asked her to “dispose of [them] in accordance with what [she] believes to have been my wishes,” according to the outlets. The same instructions were stated for his cars, furniture, books, clothing and household items.

Posted by xpicassox at 12:05 PM No comments: